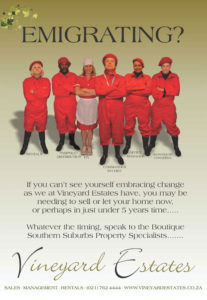 This full page ad was placed shortly after EFF debut in Parliament in their red overalls. It’s amazing how we have become used to it – but at the time some folks felt that the end was nigh…. Truth is that if you look carefully at the message there are some serious, and I believe positive sentiments reflected. The ad was trending on Twitter and was covered on many of the national news sites. Even Comrade Julius was interviewed about it. It created such interest that the newspaper asked if they could run it again the following weekend at no charge….. 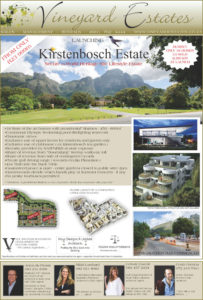 April 1, 2015 happened to be on a Wednesday – and in 2015 there was a Midweek supplement of The Cape Property Guide published every Wednesday in the Cape Times.  We had some fun with this one – and were very lucky that Kirstenbosch Botanical gardens happened to be redoing the upper parking area – which gave us an actual photo-op of construction vehicles on site. (see above) I had a lot of fun with this one – with a friend asking about my new agent Costa Fortuna. Whose business slogan is: “Give me a call, Babes…” Seriously?  it just proves that even intelligent people often speed-read things and don’t really apply their minds to what they see….

We had a few other notable adverts in the years past – sadly I havent yet found any copies. We do try not to place the same old boring ‘copy-paste’ ads that you see all the time in the property advertising arena.

Actually, the ever charming Mrs Pam Golding pulled me aside at an Institute of Estate Agents function and surreptitiously whispered:

“Don’t tell anyone Anton, but yours is the first page I turn to in the newspaper…..”

Advance search page is not configured yet. Please read this theme documentation for the Advance Search page & form configuration details.

From 1 Dec. Just the perfect design for today’s lifestyle…

Compare
You can only compare 4 properties, any new property added will replace the first one from the comparison.